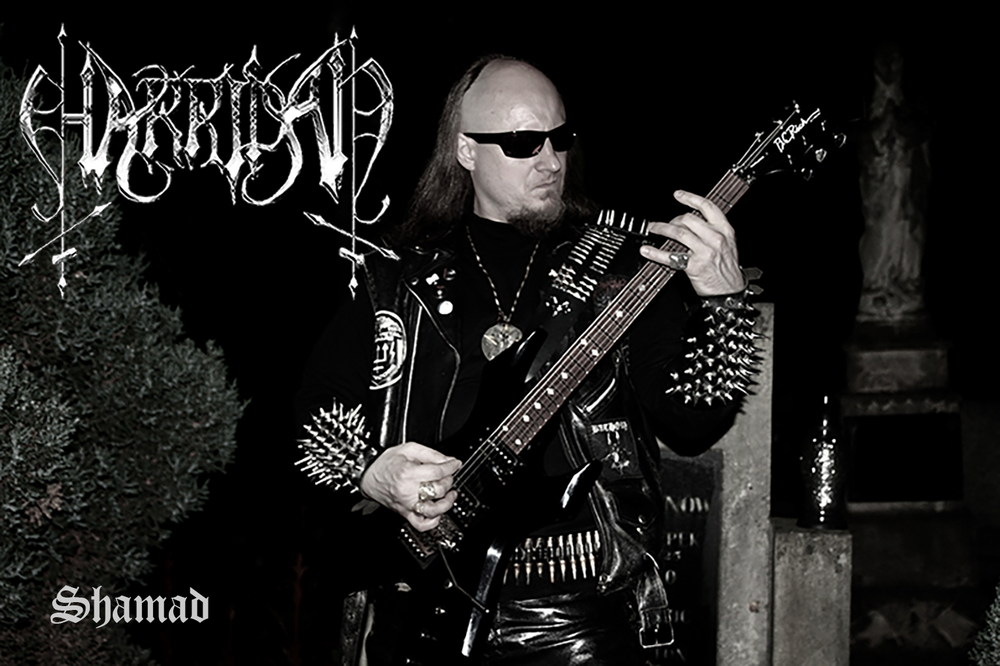 Shamad is a Metal-Alternative band who acted for the higher purpose of Harridan.
Chaos and Glory for Darknees, Dark, Magic, Ocultism and Death.
In december 1997 the first hymn was created, Deamonomania, and after that, between january/february 1998 Winter Sabbath.
Vitia (rip) initially played drums on Deamonomania.
All music with lyrics and visions was forced into the real world.
Rituals, masses, curses!
From out of journeys to cemeteries Shamad created the next dark hymns and lyrics.
In march 1999 Fatum joined Harridan as drummer and improved on the previously simple drums.
In the same way he was initiated into some arcane rites of Harridan.
On 11.11.1999 the first reh.tape, "The years Of Silence" was recorded.
Two hymns, Daemonomania and Winter Sabbath, and four from material for the first album were recorded.
Throughout the remaining period Harridan wanted new people but could not find appropriate creatures.
In the same way Harridan did not unfold like "other" bands.
The next reh.tape was recorded on 21.11.2001: "Dramatic Ritual".
There were 11 hymns which were a mixture of materials from Harridan's three previous albums.
In 2002 LordX joined Harridan as vocalist, however after a few rehearsals he landed himself in hospital and to this day can no longer sing.
This was a stormy season for Harridan, not only were there personal problems but other as life troubles as well: no money, no instruments, no space for rehearsals, hassle from police, courts, and other people.
Harridan was back to the cemeteries and became like a wild whisper, legend or just like dark shadow with no chance of exist.
From 2003 Onwards, Harridan played only two rehearsal and recorded them to tape: the first one was recorded in february 2004 and called "Demon Est Deus Inversus".
The second one "Cemetery", from march 2005, and included a few songs from Shantak a new black/thrash project (Shamad/Fatum).
Between 1997 and 2005, lots of people were auditioned.
With Harridan, time turned out to be the best test of people.
Without climate, belief, spirit, wisdom, power and special spirituals way, nobody could create Harridan.
In June 2005, Shamad moves to Enlgland. One year later Fatum also comes.
In october 2007 Shamad recorded the single "No More Lies" and in november the same year, the demo "Return God Of The Dark" as a project.
This demo was a split of two demos: two hymns "Deamonomania" and "Winter Sabbath" were called "Return God Of The Dark", and a second one, "Harridan" with two hymns "Destroy Fucking Tiamat" and "Harridan".
In february 2009 Fatum recorded drums and after that in 3 fullmoon nights Shamad created the ritual "Magus Mortis - ritual".
On 04.2009 the first album "Magus Mortis" was finished.
The next reh.cd was recorded after the sunset on 06.2009: "Erga Mortis Gloriam".
There were 7 hymns which were come from material of second album.
Fatum leaved the band. The reason is choose a different way (no practice rituals, no Harridan).
Black Masses, pacts, curses!
Live started fight ones again, rituals into the darkness saved Harridan inside Ancient Abyss by Demons.
On 04.10.2010 Shamad has been stopped by police and extradited to Poland where he landed himself in prison. The time was stopped.
Rituals, Demons, Disasters!
The Equinox 03.2015 is no more to say it. "Return God of the Dark" full project has been finished. Incantations, inverted exorcisms, prayers during special time like new moons, winter solstice and times for the Evil Spirits. The Ancient path returned. Life with the powers of light is finally defeated. The power of the false pentagram has been Off path and stopped. Illusion of light magic was destroyed by the real evil powers and trapped forever in the abyss of Azathoth. Yoggoth is showing the way, Crawling Chaos going to finish earth fate.
In December 2020 Harridan start recording material at Silence Grave Studio. The accumulated material including 1997-2004 years. One EP "Return God of the Dark", and three full albums: mentioned above 1st "Magus Mortis", 2nd "HUL", 3rd "Nekroticizm".
Harridan play only from the dead and beings of spirit dimensions Mirat Fortin.
Harridan don't play for life, light or love.
This is a Cult Of the Dark! This is a Cult of Death! This is a Cult of Ancient Ones!

Have you always been interested in music? What is your story and how did you start making music?
I have always been interested in music for a long time. The musical evolution itself ran in one direction from hard rock to metal. It would always be faster, heavier, more screaming. At the same time, I was looking for different instruments, as a kid I played my father’s classical guitar, or I made my own drums from cans and just tapped out rhythms. It wasn’t until ’94 that I had my first contact with an electric guitar that I could play. And so it started. The first riffs were made in the cemetery. Music is about the atmosphere. I used demonic spiritualism where, in combination, it led to the creation of Harridan.
What are you working on now? Any future releases we can look forward to?
Currently, I have finished the mixes on the first album. It has been called “Magus Mortis” since 1999. It will consist of 9 hymns. I also recorded all the music on it myself and I dealt with mixes and master in my home studio Silence Grave. Album plans to release early new year. The drums are already recorded for the 2nd and 3rd albums.
What Is Your Ultimate Goal In The Music Industry?
There is no such purpose, not for me. I express myself through music.
What Has Been The Biggest Challenge In Your Career Thus Far?
Recording the accumulated music in the way I imagined it. It took me a lot of time. A place to do ritual compilation for recordings and exercises, complete the musical equipment, learn to play all instruments and use software for creating music, recording, then mixing, mastering. You learn all your life.
How do you go about writing a song? Do you have a melody in your head and then write the other music for it or what’s Your typical songwriting process?
There is no rule, sometimes something comes out on drums, sometimes on a guitar. Vocals always adds final expression to the end. Pure improvisation. I writes texts thematically for a given album. This has implications for the music-making process as well. I don’t do anything in Harridan during the day.
How do you feel the Internet has impacted the music business?
It is certainly easier to announce everything, to spread it out. But the quality has dropped as a result of this and the lack of buying original discs. Everyone now prefers YouTube or another social networking site. People prefer to listen to mp3s because it is more convenient. I think that here is the whole point, the internet makes you lazy, you have everything within a click of the mouse, you don’t even need to get up from the chair. This is no good.
List some famous musicians currently on your playlist?
I don’t have a list of favourite musicians, I listen to everything that gives a kick from old school black, death, thrash metal. I have favourite albums but not bands or musicians.
What Did You Do Before You Started Making Music?
I always put music in my head, at the beginning as a great fan of various bands, singing or humming, tapping rhythms with my hands, etc. I am constant when it comes to my interests, so heavy music and spiritualism / demonism go hand in hand. These are the paths that have become my life since I was a child. Also songs, hymns, songs are created on the turn of my existence so far. I have never given up on music.
Would you have any advice for young people wanting to follow in your footsteps?
Never give up in achieving your goal.
If you could change anything about the music industry, what would it be?
I would forbid antifa to influence any concerts anywhere in the world. Concerts or gigs are supposed to take place regardless of who is playing there. You don’t like it? – then don’t come. Metal fans don’t really care who believes what or what their views are, because people come to listen to music. And everyone will tell you that. And no matter if black or white, it is not up to us to judge, and the only division of hatred and racism that is sown is by doing harm to others, such as the concert chancellors mentioned above.
How do you feel about originality?
There is nothing like originality, only fashion. So everyone presents themselves in a pictorial or individual way. We only have a dozen original metal albums and hundreds of thousands of bands and projects created. So this is a fashion that is noticeable both in terms of clothing and a given genere of metal. However, the most important thing is what you do to be in line with what is playing inside you.
Is there anything else we should know about you? or Something that you would like to add?
It’s now available on the Harridan cd “Return God of the Dark”. You can purchase it via bandcamp and discogs or directly via miratfortin@gmail.com (this copy will be a bit cheaper without the extra fees requested by online shop services). Thank you.

Links where your music can be purchased?